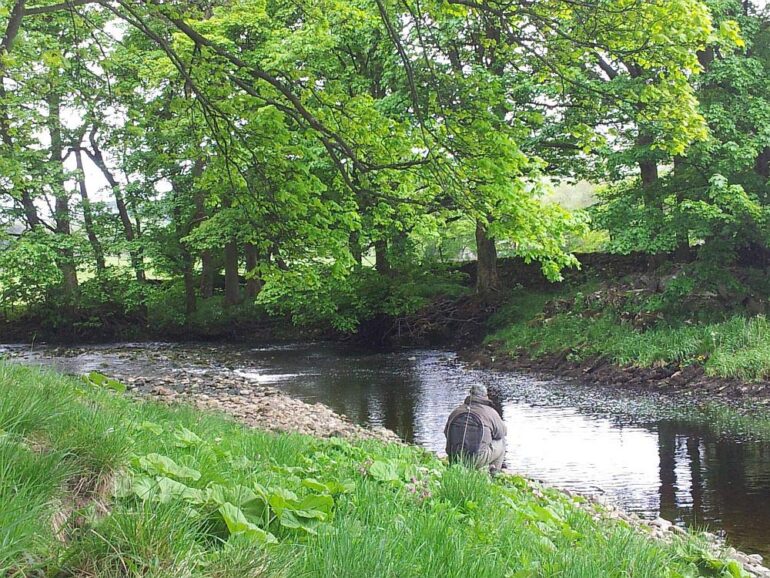 This project is is in some ways an experiment to see just how successful the club can be in working with others to conserve and improve habitat on the river.

In following the advice of the Wild Trout Trust, who reported to us that the most effective means of improving the quality of habitat on our fishery was to create additional buffer strips within which natural herbage and wildlife could thrive, we sought a suitable stretch of river as a pilot project.

After some negotiation with the landowner who proved enthusiastic we chose the confluence of Cam Beck and the main river as the most suitable site to begin work. This area is known locally as Nanny Carr after the deep pool at the confluence and is adjacent to one of the best trout beats on the upper river yet it is being seriously damaged and degraded by grazing livestock and consequent erosion during spates.

Although we are a very long established club we have always been relatively small in terms of numbers and this limits the resources we have available to undertake more ambitious conservation projects. We are very fortunate to have locally a proactive and encouraging funding body in the Yorkshire Dales Millennium Trust whose application process is a model of simplicity and informality. We are delighted that the YDMT have been able to support our plans and they have granted us up to £2000.00 to cover the cost of the work. This money was later supplemented by a £1000.00 grant from the Wild Trout Trust to cover the purchase of tools and provide for training so that an accurate survey of the buglife in the river can be completed. This survey will provide us with an accurate benchmark against which to measure future improvements.

From the outset we were concerned that the project should include some local interest and input consistent with its location on private land. Step forward Craven College whose Land Based Studies Unit were looking for practical fencing and conservation projects for their students. We formed a close liaison with the LBSU and a number of their teams will carry out the physical work of erecting the fencing and installing the water gate across Cam Beck.

This partnership has many advantages on both sides. We get an enthusiastic, capable and insured workforce who will work for nothing. The students get extensive and supervised practical experience of some quite technical fencing work that will take them through most of the winter term. They also gain a profound understanding of the importance and practice of riverine habitat conservation that they can take back to their own family farms and replicate where the opportunities exist.

The aim of the project is to raise the potential of this beat of the river to carry its optimum population of native brown trout. This will be done by providing a buffer strip some 6 meters wide on the currently unfenced bank within which herbage can naturally regenerate supplemented by judicious planting of native tree species such as alder, crack willow, sessile oak, rowan, downy birch, ash and hawthorn. The opposite bank is already walled some 6 meters back from the bank edge but suffers degradation by stock crossing from the unfenced bank.

We want to encourage a diverse range of species to colonise this area and have chosen tree species that will promote this. It’s a potential site for water voles and we will do what we can to encourage this endangered species to take up home in the high banks here. We plan to erect some 500 meters of fence both stock wire and post and rail as dictated by ground conditions and flood potential.

The map below gives an indication of the area and the extent of the planned fencing. The sketch shows how we envisage planting up the enclosed area with native tree species to create a diverse habitat.

Work here began in early February 2007 and was completed by the end of April. Over 500 metres of fencing have been put up and we have planted 300 trees around the confluence of the beck and the main river. It’s not been easy work. The geography here is challenging and the persistent rain over the winter has made ground conditions very wet. Despite this the students have coped admirably and have acheived very professional results.

You can keep up to date with future developments by visiting the keeper’s blog at:

We are immensely grateful to many people for encouraging and assisting this wor not least are Alistair Maltby of the WTT, David and Marma White who own the land, Demelza Hartley and Russ Turner of Craven College, Stephen nc2Hatton of the Ribble Catchment Conservation Trust, Neil Handy the local EA Fisheries Technical Officer, Phil Eckersley of Natural England and in particular Tim Jacklin of the WTT and Don Gamble and the Trustees of the YDMT who agreed to fund the project.

Hit enter to search or ESC to close